So several years ago, a certain Lee Kuan Yew and his colleagues decided it was in Singapore's best interest to forge a path separate from their bigger neighbour on the Malayan peninsula. And I, for one, am not gonna complain about that move, since quite obviously, we have had a pretty decent existence since then, even though all the naysayers then predicted that Singapore would (choose one):
And so today, like any true-blue Singaporean (yes yes, I know, stop laughing), I went to celebrate the nation's independence.

First of, there was a KHCN meeting, where all 4 of us (Steve is away in America right now) remembered Singapore in our prayers. And then we went out to eat (how very Singaporean) at a Singaporean restaurant in Akasaka. 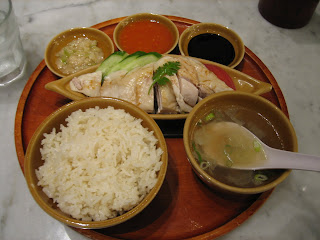 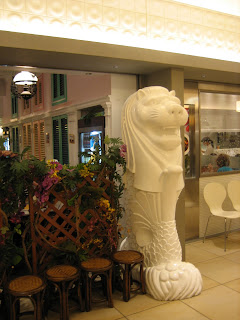 You can tell how Singaporean a shop is by the size of the merlion it has. This merlion is fairly big, therefore it's quite Singaporean.
And then I had to rush up to Urawa for English conversation group there. But on the way back, I went to settle some other NDP thing.

See, it's pretty much de rigueur for my family to watch the NDP parade while eating pizza. Specifically, pizza from Pizza Hut. And as I know the location of a nearby Pizza Hut in Shin-Tokorozawa, I was able to get my hands on another pizza in remembrance of the family tradition. 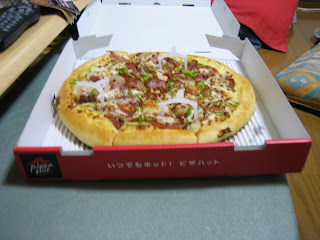 In true Singaporean fashion, this pizza was on sale, so I only had to pay about $14 for it. Whee!
Incidentally, something unfortunate happened last year, in that my family was unable to get pizza, since the telephone lines were overworked. So here's the contingency, as per last year: 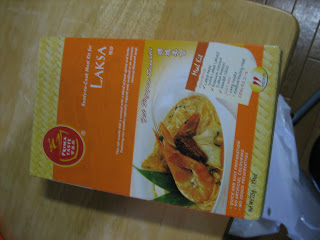 Just in case!
Yup, so Happy National Day everyone! Hope you had a great long weekend!

[UPDATE!] Hmm, I guess it appears my fears this year were unfounded. 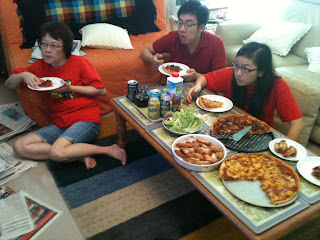 We managed to get pizza this year because we ordered at 2.30pm, not from Pizza Hut but Canadian Pizza ("2-4-1") - cheaper. Chicken wings were roasted by Mom - also cheaper. No need for us to resort to Laksa this year. Haha. Happy NDP.