So today on the train while going to Ochanomizu to attend a church service with the short-term team, the conversation somehow ended up being about the X-Men.

Vernon: Wah.. so this Magneto (he pronounced it Mag-NEH-to) quite powerful ahh... what?
Hui: *Laughing* It's pronounced Mag-nee-to.. who's Magnehto? Sounds like some ice cream!
Me: Yeah! Magnehto, the combination of a Magnum and a Cornetto... Magnehto!
Hui: I can almost imagine someone trying to sell it...
Me: Like Ian McKellen! "YOU SHALL NOT PASS....this opportunity to get two ice creams in one!"
Vernon:....

Worship at New Hope Church in Ochanomizu was quite enjoyable, rather different from what we're kinda used to at housechurch.

Also, I made a haiku in the shower:

Props to Shion at Shinagawa Kai for leaving the seed of this in my mind for over a year. And no, it's not supposed to make any sense. hahahaha

[UPDATE!]
My brother put the haiku into his Mac translator, and the random thing it generated was too good to leave aside: 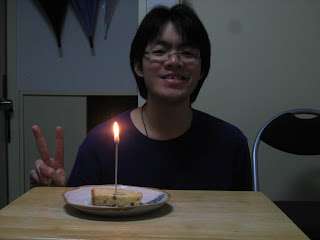 your haiku's the best. it made me laugh. and that's not easy.