Just over a week ago, I was traveling up to Ichinoseki base with 6 other members of the HQ staff. The main purpose of this was to be for HQ people to be able to see what the bases were doing, and to help out there for a bit.

Oh, and about two weeks before, I was appointed the group leader. How about that.

So on the 26th of July, 7 of us set out from HQ; Laura, P-chan, Keith and Cece, Ramona, Marie, and myself. I had kinda studied the route beforehand, but it was good that Laura knew the area well, and could get to the Gaikan without any help. We got up to Ichinoseki pretty easy, and took a long but scenic route around the city and out to the base.

We did have to stop a couple of times along the way though, because our GPS went slightly wonky on us, and once, it was because there was a huge crack on the road up to the camp. Some of us got out a couple of times to check about and stuff, and because of all the forest around us and the mist, I half expected a dinosaur to jump us like in Jurassic Park. 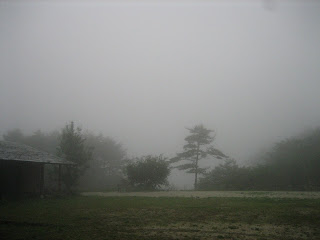 Come on, wouldn't you expect to see dinosaurs here too?
We got to the camp at about three, and met the staff members and CCC team when they got back in from volunteer work. We got to go to a nearby sento that night, as the heaters in the camp's bath were off.

The next day we went to Rikuzen-Takata to do work. It was raining pretty heavily when we were getting the assignment at the volunteer centre, and we definitely saw lightning. And driving over to the place, we kinda got a bit lost. But by the time we reached the worksite, the rain had stopped completely, and the sun was out. Victor, the leader of the CCC team, told us much later that he and the others had been praying for the rain to stop.

The day's work was to help to pull weeds and clear up a garden. It was a rather large garden, and it was sprawled across a hillside, so some parts of it were on pretty steep gradients. It was kinda the first time I had to do gardening work, but after a while, I got used to the work. At about 2 in the afternoon, the owner, and 80+year old lady named Sato came to visit us. She was a tough old lady, walking over the hill behind the garden, and carrying a whole bunch of energy drinks and snacks for us.

We found out that she lost her daughter-in-law during the tsunami, and that she was now living in a evacuation centre. She was really grateful to us for coming out to help her, especially since so many of us came from overseas, and this, as well as her hospitality to us, would be a recurring theme during our time there.

At about that time, it started to rain pretty heavily, and Victor was saying that God did answer prayers because He gave us just enough time for us to do our work. One of the CCC vans sent Sato-san back to her place (she had actually wanted to walk back in the rain without an umbrella, but we managed to convince her to take a lift from us), and then we headed back home.

Ok, I realize that to write about the whole trip in one post is gonna be too long, so I'm gonna break it up into several posts, which I will try to do as soon as possible. I guess I should have done it during the trip itself, but everytime I got through the day and cleared out the supply requests, I was too sleepy to think straight, hence the recap now, when I'm already on my next assignment in Tono base. So, hopefully, I don't forget too much of the trip.
Posted by ArkAngel at 6:45 PM