On the 2nd day, we went to the place of a lady called Onodera in Kesennuma. She lived in a three-storey house, and the third floor was actually untouched, but the tsunami and reached up to about a foot on the second floor, and had swept away everything in the first floor. This was also when we started to notice a smell. On the first day at the garden, there was no odour, and it smelt pretty much like what one would imagine a garden would smell like. But at the area around Onodera-san's house, there was a bit of a smell. Soon however, we barely noticed that, because we had to wear breathing masks, and it took too much effort to just breathe through it.

The HQ team was assigned to work on the second floor, and our work involved mostly sweeping up the dust and mud that had gotten settled on the floor. It sounds pretty simple, except for three facts:
So what happened was that after one round of sweeping (which was a lot harder than it sounds), we would look back on the swept places, and realize that there was still a lot of dust on the floor. And we would sweep again, and find out again that there was still dust on the floor. And we would be unable to reach the dust under the beams. And we had to breathe through breath masks for safety, which got pretty unbearable after about 5 minutes.

It did get very bearable at about 10:30 though, because that was when Onodera-san made an appearance, carrying a massive amount of drinks and snacks with her for us. Like Sato-san the day before, she was very grateful to us for coming, and her lack of a furnished living room did not detract one bit from her hospitality. We all very happily took a break from our work to get a bit of rest, and to talk with her.

Both Mrs. Onodera and her husband were ok after the tsunami, but their house was damaged, and she now stayed up in Aomori prefecture at an evacuation centre, but came down to Kesennuma 3-4 times a week to check on her house and clean it up. She felt fortunate because her house was salvageable, while most of the other houses nearby were totally wrecked.

We continued cleaning up the place, and by lunch time, one of the rooms on the top floor looked reasonably clear of dust. The kitchen though, was a completely different matter. Although Laura had been working hard scrubbing the floor and sweeping up dust, there was still a lot of work to be done. We did break for lunch though, and that's when we saw the scourge that is flies. Lots and lots of flies. You couldn't hold your sandwich still for a moment, for flies would start landing on them almost immediately. They were everywhere, they got in your food, they got in the car, and worse still, they refused to get out. And flies are notoriously difficult to kill.

After having to contend with flies, we got back to cleaning, and continued sweeping and scrubbing away at the dirt on the floor, till it was time for us to leave. Victor, leader of the CCC team, gave a small tract about Christianity to Onodera-san, and she mentioned that she had gone to a Catholic kindergarten, and actually still remembered some of the hymns and prayers from that time. 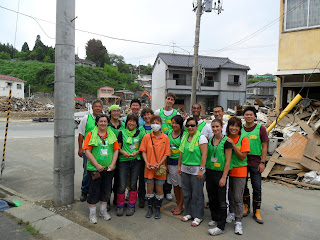 Oh, and that day, a reporter from the Nikkei Shimbun, Kishida-san followed us around to get materiel for an article she was writing about foreign volunteers serving in Japan. If you're interested, the link to the article about CRASH by her is here.

The following day, we went back to the Kesennuma Volunteer Centre to get our job assignments. And once again, Nobu-san (the translator for the CCC team) suggested we pray that we would get an assignment that would allow us to stick together as a big group. The day before, we had asked God that we would get a job that would let us go as a big group of 15 people, and we were blessed to meet Onodera-san. On this day, we prayed, and once again, God gave us a job that required 15 people, at the very same location, Onodera-san's house. 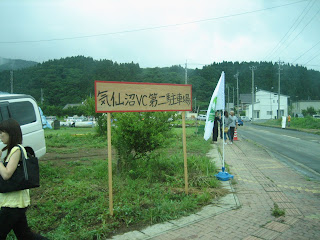 It was a great blessing of course; not only were we able to stay as a group, we would also be able to meet Onodera-san again, and we also knew what tools would work better for us. So this time, instead of taking huge shovels and wheelbarrows, we searched for small brushes and screwdrivers to help clean the nooks and crannies, and to help chip away mud.

Onodera-san was quite happy to see us again, as she was used to us, and we knew what we had to do, so we got back to work again. We also had two other volunteers with us, Nakagawa-san from Shiga prefecture, and Okubo-san from Tokyo. Both of them had come up on their own to do some volunteer work, and were joining us for the day.

We had to start sweeping and dusting up all over because the dust had returned, and had pretty much covered up all the area already. Laura and myself continued working in the kitchen chipping away at the caked mud with screwdrivers and crowbars, while Roberta swept outside and Marie cleaned up some cupboards outside. We pretty much remained engrossed in our work, though we did stop for a break at about 1030, and took a longer rest at lunch.

After lunch, I went back up to the kitchen to resume my chipping work. I had been using a screwdriver to scratch away at some mud that had been stuck on the linoleum on the kitchen floor, and had been doing so for more than an hour. That's when Marie came in with a wet cloth, and pretty much cleared more mud away in 5 minutes than I had chipped away in 1-and-a-half hours. 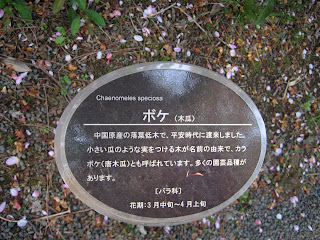 But thanks to Marie's bright idea, we did manage to clean up the kitchen, so much so that Onodera-san said it looked "pika-pika" (bright and sparkly, has nothing to do with Pikachu) by the time we were done and had to leave. As she had not requested help from the volunteer centre the next day (our last work day), we agreed to stay in touch even after we had gone back to Tokyo, and she invited us to come and visit when her place was spruced up again and ready to receive guests.

When we got back to the base, we heard a bit more good news, because Woody, the base manager, had cleared his Japanese license test on the first try.

So that's it for the second and third work day. We had an earthquake somewhere one night then, and it wasn't too bad for the base building, but it does rattle a lot, which kinda makes it sound worse than it actually is. I'll continue on in the next post about our last day of work and our off days.