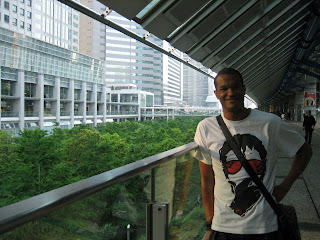 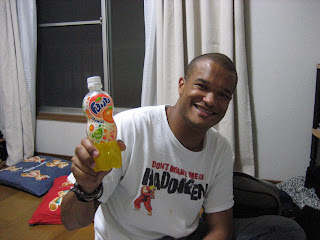 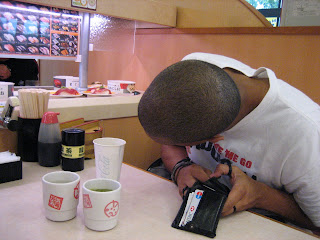 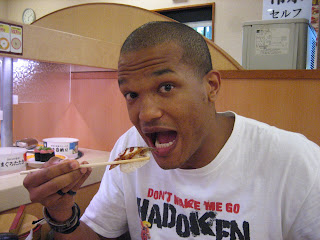 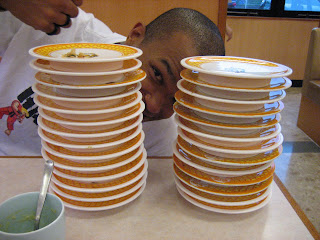 I mean, he really loves the stuff. (And onigiri too) [This picture is not an accurate representation, as it also includes the plates that Louis and I ate. But it does make it seem like a lot more impactful doesn't it? hahahaha].
So this is really a bit late to write about this, but let me introduce my first ever housemate in Japan. We were housemates about 3 hours after I touched down in Japan, and were staying in the same place (my house) for about a month. Which, of course, is also why it's a bit too late, since he left on the 10th of June.

He's from Brazil, and his full name is Joao Pedro de Carvalho Neto, which you may realize is a bit of a mouthful, so he helps us by telling us to call him JP.

Incidentally, you may have heard of him in some of Uncle Louis' prayer letters. This has been the fourth time he's come to Japan on a short term mission trip, for a month each time. And he does outreach by doing dance.

Yes, that's right. JP's a dance instructor, and he uses his skills to reach out to other dancers, as well as to show his love for God. The music he uses and his dance steps are all meant to reflect God's glory, and he has stated he'll never dance for the express purpose of fame, or money, unless that money is meant to help further God's kingdom here on earth. 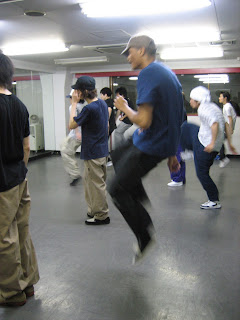 JP went to one of his friend's classes for a lesson in a different style. Not sure what it was called, but well, he really exerted himself then.
I would upload a video of him dancing at the studio itself, but I can't seem to be able to upload the thing bother. So here's a video of him dancing while he was in England, I think.

So as I was saying, we became roomates about 3 hours after I reached Tokyo. Which is about the time it took for me to reach Tokorozawa, and to dump my stuff in my apartment. Then he appeared too and dropped his stuff of. And that was it.

He's really been a blessing to me and to those around us, always being so energetic, enthusiastic, and cheerful wherever we go and whatever we do. Among the blessings I've received from him are:
We also both found out that we can survive on a diet of Fanta and onigiri. Which is really quite cost-effective. If you want to save money on a meal, do that. Here's the rough calculation.

Of course we didn't do that. Not all the time at least.

JP also plans to come and serve in Japan long term. After he finishes Bible college, he'll be heading to Singapore (in October) to go for OMF's orientation course, and then he'll head up to Hokkaido for language studies. He is still trying to raise support though, so please pray for him, that money will not be a barrier to him coming to Japan. And if you see him in Singapore, say hi. He's a really nice guy.

Cheerio!
Posted by ArkAngel at 9:37 PM