So I got distracted...

Ok, so much for a *long* post the previous time... that was actually rather short, considering some others like the one on the trip to Phuket.

As I was saying before I was distracted by Extremis Sleepitis, Louis had a week's worth of celebration, and got three cakes from his housechurch friends.

Anyway, Nelson also dropped by from Singapore. He was going through Tokyo on a short personal holiday, but took some of his precious time to join us in some ministry and stuff. I first met him at Shinjuku station where he was visiting Intercross (Shinjuku/Ikebukuro Housechurch), and he joined in. We were both classmates in Japanese language class in NUS, and we were apparently primary and JC schoolmates, though we didn't know at that point in time.

After Intercross, Karen (who co-leads Intercross), brought us to the Tokyo Metropolitan Government Building (I think that's what it's called), which offers a nice view of Shinjuku area from the observatory. This is one shot I got: 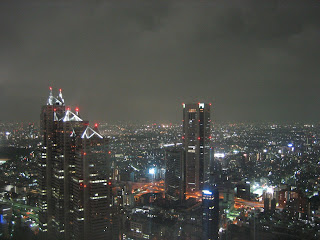 Nelson had a bigger camera, so I think he got something similar, just nicer.
Nelson also joined us on Sunday for housechurch at Amuzing Grace. Although it was his first time in the area, he managed to find his way to the place rather easily (because I drew a very nice map for him). 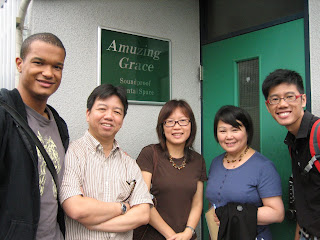 JP, the 50-yr old guy, Auntie Chris, Mrs. Shiraishi, and Nelson.
We went to Akihabara after that to meet some friends, and there, we also met this guy: 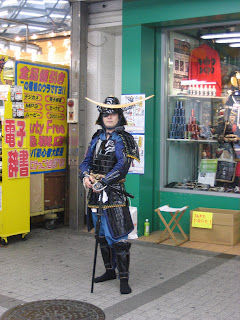 Let's play guess the name of the Sengoku Jidai Daimyo! Winner gets a packet of natto.
Basically, I have more or less settled into a routine here in Japan. Weekends are ministry days, and so usually we take Monday off. Tuesdays and Wednesdays I go to Waseda Uni, and on Wednesday night, I go to Shinagawa HC, which is headed by Shion. Strangely enough, I don't have a picture of the Shinagawa HC people, who are really quite a nice bunch of people. So here's a cool picture of a building in Shinagawa I took instead: 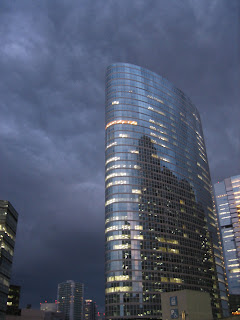 Looks so ominous that it's cool... and it bears a slight resemblance to the mother ship from Homeworld.
Thursdays and Fridays were supposed to be my language days, but Thursday is currently Self-Study Day, because the class I was supposed to go to has new rules that make me ineligible for that class. Every other Saturday is Intercross, and Sunday is Tokorozawa HC.

So that's about it. Will put up some more stuff soon, like my house, my phone, my housemate, and the first time I tried to cook something. But I'm running out of words right now.

Cheerio!
Posted by ArkAngel at 3:58 PM