Today, I went up north to Ibaraki prefecture with Louis, as well as two new people I met, Kodaira-san and Takahashi-san. I didn't realize quite how long it would take to get up to Ibaraki, but as a general guideline, Ibarakai is not even bordering the Tokyo Administrative region. It does border Saitama on the southwest, so it's not like traveling to Kyoto, but it did take almost three hours to get there by car.

Ibaraki is a very beautiful place. Compared to the urban landscape that is the Greater Tokyo Area (which is pretty too), Ibaraki is composed of a lot of farmland, and it is also where Japan's second-largest lake is. Unfortunately, I was too caught up in watching the scenery whizz past the car windows to take any pictures. And I seriously doubt my photos would have done justice to how nice the place was.

Strangely enough though, the first thought I had after setting foot in Ibaraki (read: got out of the car) that stuck with me was when I was in a toilet in a convenience store, and it was about how the toilet smelt like an airplane. There's always a certain smell that I always associate with the interior of an airplane, and that's what I smelt (or thought I smelt) when I was in the washroom.

Anyway, we got to Inashiki city around 11, I think, and we met Mrs Okubo, who we did a spot of Bible study with. We then went to visit her Uncle and Aunt (the Iijimas), who run a farm. We did the same Bible reading and discussion, which was Romans 12:9-21. Here's a picture of all of them at the session today: 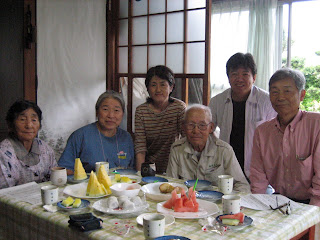 (L-R): Mrs Iijima, Shirai-san, Takahashi-san, Mr Iijima, Louis, and Kodaira-san
As mentioned, the Iijimas run a farm (if you look past them, you'll see part of the garden. The farm is behind that). However, due to the very fact that they run a farm in the middle of many farms, they don't really have a church to go to. So Louis tries to go out to meet them to try and do some kind of Bible study/fellowship/follow-up once a month. But still, it's not easy, so please keep them in your prayers.

They also have a rather nice house. It was built quite a while ago methinks, so it's built like the house in Totoro, with the tatami rooms, the sliding doors and the corridor along one side of the house. I almost expected to see one of the little black dust balls to appear there. I would show you a picture of what I'm talking about, except I don't have a picture. But go and watch Totoro, and when you see the house, that's sort of what it looks like.

Continuing with the Miyazaki theme, some of the houses, with the farmland, also looks like it could have been in Totoro (even though Totoro is based around where I live in Tokorozawa). The clouds looked like they would have been in Castle in the Sky, and one place where we went under a bridge reminded me of Spirited Away. All we really needed after that would be to see a walking house, a red seaplane, and a talking fish to make the show complete.

We also stopped by a shop along the way that apparently is famous for manjyuu. So we got some. 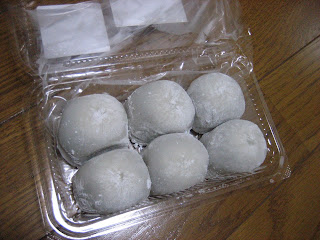 Mmmm... manjyuu...
One thing I'm really thankful to God for is the that for the past couple of weeks we have been blessed by having Steve's team from his home church in Fresno, CA, come down to help Steve. They are enthusiastic, willing, and great to be with. Here's their picture so you'll get to know who they are too. (Sort of) 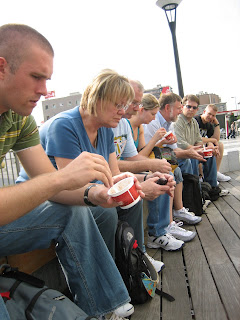 (L-R): Phillip, Jill, Dave, Ashley, Steve, Matt and Dan.
They arrived last Tuesday. And the next day, they were out and about doing ministry with Steve. They've gone to Waseda, helped run Bible Studies, visited the Shinagawa HC, given testimonies, and done several other things.

So anyway, we'll all be helping Steve move his stuff into Louis' apartment tmr, and move Louis' stuff to a storage area. And I'm getting zoned out again. So I shall stop here.

Cheerio!
Posted by ArkAngel at 8:48 PM

manjyuu looks a lot like mochi... but since they are diff words, i shall assume that they are diff. so, what's the diff??

hey soon kiat here, ur chatterbox dun seem to work anymore lolz... anyway yea add me at fb tomas_ulver@hotmail.com... catch up w u when u are back in sg. take care dude

>>purplecross
A manjyuu's the whole thing, with the red bean paste and stuff inside. Mochi is technically just the rice flour part of the manjyuu. I think.

>>soon kiat
Yeah I noticed. Tried to leave a tag for you a while ago but it didn't appear. Bother