Well now, this post is mainly for M, who's coming later on, and is thinking of taking the train from the airport over to Tokorozawa. So this is the way to go via train.

First, when you get off the plane, you should be in Narita airport's Terminal 2. As soon as you clear immigrations (which may take a while since you are a gaijin) and customs, you will come out into the arrival hall. So what you do is look for this counter: 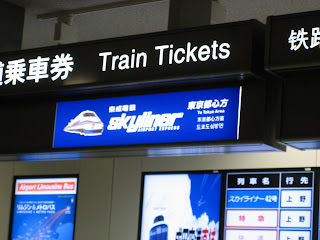 Yes, I know it says Skyliner, but the counter sells both the Skyliner tickets and the Limited Express ones.
Here, buy the ¥1000 ticket, and then you can proceed on to look for the train station. Remember to get the ¥1000 one ok. After that, the train station is in the basement of the airport. I think the arrival hall is level 1. To find the station, please follow these signs: 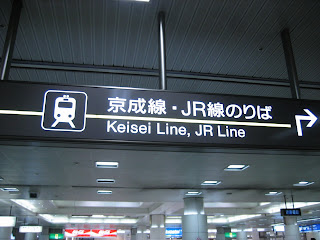 These are all over the place in the airport
As you can see, there's the Keisei line and JR line, but the station is where all the trains go to anyway, so just follow the signs. Oh, and in case I forget, the ticket looks something like this: 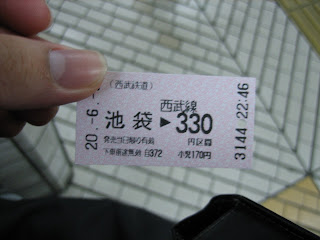 Ok, so this one is not really your Keisei Line Limited Express one. In fact, it's the one you'll get when you're at Ikebukuro (池袋) and heading down to Tokorozawa, but yeah, they look pretty much the same
So you'll need to go through the turnstiles. Feed the ticket into the slot, and remember to collect the ticket when you pass through. It's like the old magnetic tickets that we used to use in Singapore. Get to the platform, making sure you go to the correct side of the platform. There are words in English, so find the ones that are bound for Ueno and Nippori (kanji for the two, in case you need, are 上野 and 日暮里 respectively). And make sure you don't get on the wrong train. The train should look like this: 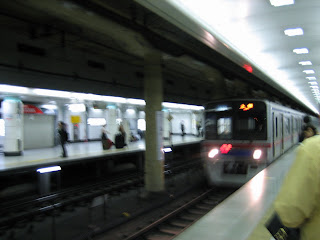 It's got a flat face sort of thing. The Skyliner looks more like a bullet train
Yeah. After you get on this, you'll have a nice hour plus ride down to Nippori, so you should try to find a seat and get a small nap or something. If you miss your stop, it's ok, since Ueno (the last stop) is the one after Nippori, so you can just take it back from the other side. And timing doesn't really matter, just that if you take too long, the trains may stop running. haha.

So anyway, after you're nice nap, and you arrive at Nippori, look around for the escalators that tell say "Transfer to JR Line". Take it up, and there'll be some turnstiles again, as well as ticketing machines, but go to this counter to change your ticket to the JR one. You should only have to pay ¥160 to change the ticket, since it costs a little bit more: 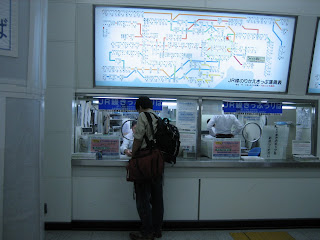 Tell them you're going to Ikebukuro, and they'll know. In case you need to know what to say, just say, "Ikebukuro e ittai kara...." should be enough.
So after you go through the turnstiles, look for the Yamanote line. It should be track number 11, which says Yamanote bound for Tabata, Ikebukuro, and Shinjuku. If you get on the wrong Yamanote line, you'll end up going through Tokyo, Akihabara, Shimbashi, Shinagawa, Shibuya and many other stations before getting to Ikebukuro, so take from the correct side. This is what it looks like: 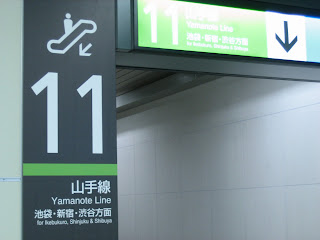 So this is what the track thing looks like. Please note it's the one that goes to Ikebukuro, Shinjuku and Shibuya.
So you take the Yamanote to Ikebukuro, then you get off and go through the turnstiles. Now Ikebukuro will probably be the most chaotic place in your train journey over from the airport, so here you must be really careful. Try not to get lost. I'll try to guide you from the Yamanote Line to the Seibu-Ikebukuro Line.

Anyway, the first thing you do when you come out of the turnstiles is to look for the signs that tell you where the Seibu-Ikebukuro Line is. The signs look like this: 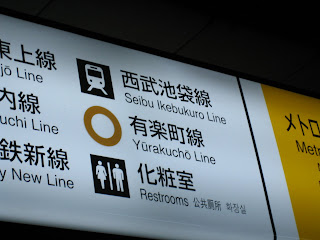 You can see it right?
So anyway, just look for these signs and follow them to the Seibu Line station. It is about 500 meters away from the Yamanote Line station, so don't happily run to the nearest ticketing machine and purchase a ticket. It should be at the South Entrance, so maybe you could take a look in that direction. Eventually, you can see a map on the wall that looks like this, and you'll know that you've reached the correct place: 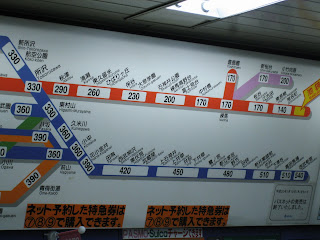 This is the Seibu Line(s) map. You can see the Ikebukuro station (marked in Yellow), and the Tokorozawa station (the 330 mark where the blue and red lines meet) 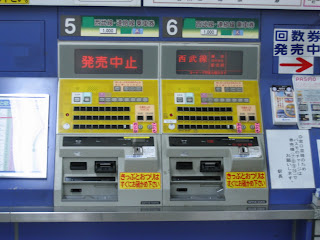 This is the ticketing machine. There should be an option available to buy a ¥330 ticket. If there isn't, you're probably at the wrong part of the station.
After you buy the ticket, you can head on through the turnstiles and proceed up to the platform to take the train. Here again, you must make sure you get on to the correct platform in order to take the correct train. You can check which platform to go up to through these LED signs that are hanging all over the place. They look like this: 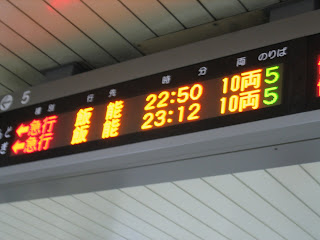 You can see the details on the sign. Basically, what the sign is telling you of the next two trains at platform 5, and they are saying that the Express trains (red words) bound for Hanno are leaving at 2250 hrs and 2312 hrs respectively. Each has 10 carriages, and will be boarded from platform 5. 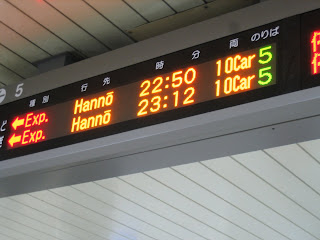 They even have English signs, in case you really need!
So when you go through, you take the escalator/stairs up to the platform and wait for the train. Oh, in case I forget, the trains that run are really on time, according to the station clocks. So if the train is going to leave at 2250, it will really leave at 2250. Oh and Japan is one hour ahead of Singapore/HK, so remember to set your watch ahead.

Ok, moving on, if you did take the correct train, you should reach Tokorozawa relatively quickly, about 20 minutes, I think. When you get to the station, look for the East Exit for the station. The signs guiding you should look like this: 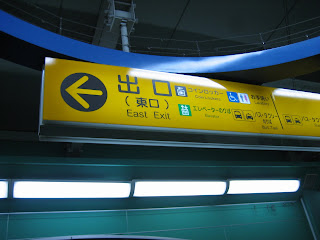 'Tis the sign.
So when you get to the place, you can see a bank of phones on the wall, and then you can use those to call us, if your phone isn't 3G and can't be used in Japan. So that's how you take train to Tokorozawa.

And considering how much trouble it is to find your way around, and lug your bags and stuff, I would suggest you take the bus from the airport. But that's up to you.

Cheerio
Posted by ArkAngel at 7:50 AM