The team reached Narita safely at about 8 pm Monday night, and we all met up with DL who nicely agreed to drive us back from the airport to Tokorozawa. It seemed to be a good idea for me to go and help to link up the team with DL, since we didn't really know him then. And JL thought it would be good if I could help navigate back to Tokorozawa.

Well, I sort of managed to accomplish half my objectives. I did manage to help link up the team with DL, but I sort of help to make ourselves lost on the way back. 'Twas a little bit difficult to navigate, since the roads were different, and it was night. And my navigational skills while walking are ok, since it's easy to stop and check where I am, but when you're barreling along at 120 km/h, it's a bit hard to make decisions. So we ended up reaching Tokorozawa at about the same time that we would have reached if we had taken the train (read same time I reached Tokorozawa a few days ago), just that we got to know DL a bit better through the long ride, and it was slightly cheaper than 6 people on the train.

So everyone was settled in nicely. The girls got the tatami room, D and R got Je's room, and I ended up in Ju's room. Slept a little late, but yeah. That would turn out to be normal in the following days.

The 6th was when we had our orientation to Japan by D&J. We woke up a little late, then we ate like Tempura at the nearby shop. Everyone really liked it, then we went back for the orientation. They went through some information on the culture and history of Japan, then we tried to think of our expectations. Personally, I've never really liked having all these sort of visioning exercises. But it did help to put some things into perspective for the whole trip, to remind us of our main purpose of coming to Japan.

We went to Costco with them after that. Costco is like this major warehouse-style shopping center with lots of American stuff. Heard from D&J that when the American missionaries heard that there was a Costco going up, they all quickly went to look for it to go and get stuff. We bought some necessities there. Of course, there was lots of cool stuff around too, like there were pizzas like 25 inches across or something, and like you could get big cartons of tiramisu, and muffins and cookies and bread and all sorts of cool stuff. There was also a nearby retail outlet shopping center selling lots of branded goods. 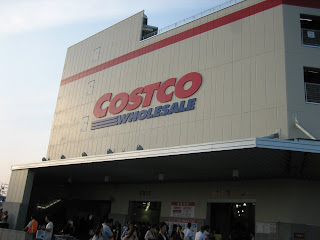 The warehouse-like, American-style Supermarket
We ended Tuesday by going to a sushi bar, where the guys beat the girls by about 10 plates I think. The all time favorite was probably the pork sushi (!? yeah I know), except for J, since she doesn't like pork.

On Wednesday, we met this dude at the Waseda University's Takadanobaba campus. He was called M, and he was really into Singapore stuff. He had gone to Singapore a few times before for fun and stuff, and he speaks Chinese, along with his native Japanese and English. It was really nice talking to him and another guy just about mundane stuff. The other guy was Korean, so he had also done NS, and so the guys were all happily complaining to each other about army life in general.

After Waseda, we went to Ikebukuro, and walked over from the station to Rikkyo University. Rikkyo is also known as St. Paul's University, but like many other missions schools, it does not have a Christian emphasis. We did prayer walking around the campus (it's rather a small school). 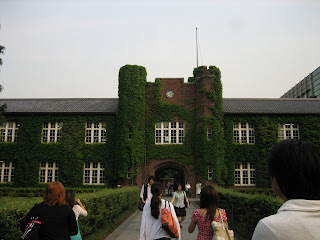 Rikkyo Daigaku. Looks Ivy-League
The great thing about the place was that at first it seemed kinda 'dark', if you get my drift. Because D&J were telling us about how difficult it had been for people to get inroads there (Waseda, by comparison, was rather easy, because they had contacts with some students), and that the students there were even more closed in general as compared to Waseda students. However, we got some encouragement at the end, when we were wandering around in our groups, at different times, we heard the organ in the chapel playing, and we all found our way there, where a lady invited us in to just sit and pray. The organist was playing a hymn whose name I can't remember, but what I do remember at that time was this feeling that God was telling us, "Even though the ground may be difficult I am still with you." It's hard to put down in words, but it was the sort of feeling that there was still hope that God would provide a way in, if not for us, then for the missionaries. 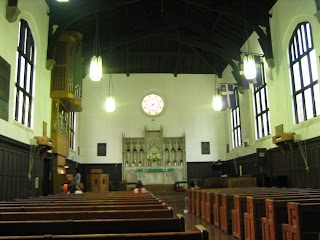 Chapel at Rikkyo University
We ate at this really great ramen place for dinner. The soup was really great, and as we all know, the soup makes the ramen. The noodles were ok too. Everyone really enjoyed it of course. Everyone, that is, except J, since the soup was pork-based.

Thursday was the first time we went to Kawagoe. Took the Seibu-Shinjuku line to Hon-Kawagoe, met HJ, and we were supposed to go eat lunch at a famous udon place, until we realized that like the ramen from the night before, it was cooked in pork broth. So we went to Manshu for other food. We then went on to the Old Town to do some basic research.

P.S. Sorry for the late uploads and stuff. Been kinda busy, and the 'net went down a couple days ago.
Posted by ArkAngel at 10:44 PM