Well, for anyone who's interested in knowing (and I don't presume there are many), I got to Tokyo in one piece at about 8 pm on the 5th of June. But of course, some of the most interesting things happened before that.

So let's start with the stuff that occurred before the trip. Like on the 2nd, family and me went up to Port Dickson for church retreat. Family and me, but minus brother, who had to go for class, which was really quite a bummer. Bummer. So my dad arranged with all his kakis to travel up in a convoy. So there was like, apart from dad, Uncle Er, Uncle M, Uncle Eu, and Uncle F. And we sort of zoomed up Malaysia at like 130 km/h. And after a while, my dad decided to exploi... I mean employ my newly received (since October 07) driving abilities and I drove up about half the way. It's really quite fun buzzing along at 130 km/h on a highway and overtaking many other cars, and trying to match the speed of the cars in front while keeping an eye on the cars at the back. It felt really cool to drive so fast. It wasn't so cool when I had to park though. Since I hardly get any practice doing it, except at home (which is easy. Like really easy), I didn't manage to park very nicely at the resort. But oh well.

So the resort was pretty nice. I can even show a picture of the place. Or sort of lah. Here's the view out of the harbor: 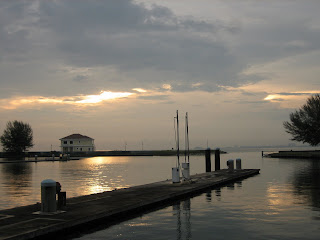 That's pretty nice now, isn't it?
So the scenery was not bad, and the rooms were really cool too, since they came with flatscreen TVs. And the rooms were pretty big. The view from our room wasn't that great though. We saw the back of the yacht club building. But well. And sometimes, the food wasn't all that great either. And this is the first place I know where the scrambled eggs didn't look very appealing. It was almost like the scrambled eggs you can find in the SFI run barracks, and one of the things they really can't do is good scrambled eggs.

And I was hoping to be able to catch up with friends, but even that was kinda denied to me, since most of my peers weren't there, and most of the rest who went wanted to catch up with each other, and most of my free time was burnt up preparing for worship. Which was a bit of a bummer too. Bummer. In the end, the only friend I think I really managed to spend time with was WL, since she tongpang-ed the car back to Singapore early.

But enough with the complaints. Haha. The sermons talked about 'Unlocking the treasure within', and it was pretty applicable to me with regard to not just life, but for the mission to Japan as well (which I must say, had even more immediate impact for me).

So anyway, I left early, and returned to Singapore to pack and get ready on the 4th, since flight time was 5th at 10 AM. Naturally, I only started packing late at night, and finished at 2 AM. Then I managed to get a spot of sleep before leaving for the airport.

So I ate my breakfast of a coconut tart, and then we all (we being my parents, my brother, my sister) toddled off to Changi at about 6, where once again, the only people sending me off were my father, my mother, my brother and my sister. The flight was in two parts, and the first part, from Singapore to Hong Kong, was pretty uneventful. Like there really wasn't anything much to talk about with regard to the flight. I mean, it was just a flight. And like, I slept for most of it. So yeah. That was the first part.

The transit was slightly more different. See, there was a one hour transit between flights in HK Int'l, and while it seems like it's a sufficiently long period of time for a transit, it wasn't. Cos it was my first time there, so when I got off the flight, I had to try to find my way to the transit point, where there was a security check, and then I went up to the departures zone. Where I realized that I was at gate 18, but the connecting flight was at gate 67, which needless to say, was rather far away. So I fumbled about for a bit before taking the internal train and arriving at the gate just in time.

So I found my way aboard the plane, a little bit icky cos I had to exert myself a bit to get there on time, and when I found my seat, the two aisle seats were already occupied by their occupants, a couple of nice Japanese ladies. I managed to squeeze myself into the window chair, and sat there quietly, though I was feeling uncomfortable from having to exert myself to get there, and I really needed to go. Like I really really needed to go. But well. Then about half an hour after the flight took off, the steward came around with a little tray of drinks and offered some to us. Well, I had been thinking of going for apple juice again (I had it on the first flight), but when the steward offered the tray, the glass of water was closest to me, and I didn't feel like reaching over to get the juice as that would have resulted in me invading the space of the two nice Japanese ladies. Turns out it was a good idea, as the moment I put the cup on the table, it started sliding towards me, and that toppled onto my lap. Naturally, of course, that meant that the water soaked my shirt and pants, and started seeping into my underwear. And if there's one thing I hate more than having wet socks, it's having wet underwear.

The two nice Japanese ladies (who had prior to that, mistaken me for a Japanese person) showed their nice-ness by exclaiming in dismay at my predicament, and then gave me a packet of tissue to help clean up. Not that it would have helped much, since my shirt and pants had pretty much absorbed everything up, but I guess its' the thought that counted.

Now my first thought that went through my mind when the cup dropped into my lap was, "Oh shit." I mean obviously, no one likes spilling drinks into their pants. However, instead of cursing the forces that be that had conspired to make my plane ride miserable, I somehow managed to quickly see the positive side of it, namely that I had taken water instead of juice. Which is really curious, since whenever I'm not being an emotionless, cold-blooded person, I am usually quick to be negative. Yet, I think I was really grateful to God that I had chosen the water. I guess it helped that I was reading 'Finding God in Unexpected Places' by Phillip Yancey.

So the rest of the flight was pretty uneventful. I did manage to use what little Japanese I still remembered to talk to the two nice Japanese ladies, and found out that they were going to Yokohama, but yeah, the flight was uneventful, the customs, though long, was uneventful. I felt the immigrations officer looked like one of my friends in Japan though, and the customs officer who was checking my bag was a rather nice girl who was quite talkative. I took the train out to Tokorozawa, and managed to reach Uncle L's place at around midnight.

So I stop here first. I shall talk about the other things I did, like go out with K, and some other mission prep stuff in the next entry, but now I need to go and sleep.

Cheerio
Posted by ArkAngel at 12:15 AM

i'm off to Japan in Dec for some mission work as well...japanese people..wonder how u're finding the extremes of Asian society there...like conflict avoidance to the extreme..my Japanese frens in Australia would agree totally..talk about cultural barriers to mission..but den again, God is sovereign and predestines pple for eternity, so He can work past any barriers..

cheers man.. great to hear from you. =) take care and keep us updated!

yes and this time, i got my own address right. =P