So as mentioned, I reached Tokyo a little earlier than the team. Primary purpose was to kinda take over the place from Uncle L, since he was leaving the day the team arrived, but I also got to slack around a bit and do a bit of fun stuff as well.

So anyway, as I mentioned two posts ago, I reached Tokorozawa around 1145 at night. It was a spot late, but I toddled over from the station to Uncle L's place. Now thing is, Uncle L, and Auntie C had left for Osaka for a conference of sorts, so in the house were Auntie D, U, and the two kids. Brother sort of remembered the code for the main door of the apartment, but he mixed it up a bit, so when I tried to press it, the thing didn't open up. Resigned to my sorry state (I mean, I was carrying a knapsack, an overstuffed laptop case, and piece of luggage full of souvenirs and cocnut milk, I had traveled from Singapore to HK to Tokyo, and then traveled across Tokyo, and I had spilt water on myself on the plane), I called the home, and they unlocked the door for me, so I got to get in, and not sleep on the outside (like a certain situation I remember myself in a while ago...).

Next morning, I woke late, then met K near Waseda. She had come over for exchange almost a year before, but we kinda stayed in contact, so we arranged to meet up. We decided to go to Ueno in the end, and so we wondered around Ueno Park, since we both had not gone there before. It was really quite a nice experience, since Ueno Park is rather beautiful. The pond is supposed to be a major attraction, and supposed to be really romantic if you go and sit on the boats together and what not, but some part of the pond was super overgrown with lily pads, and the water was a rather bright green. (Looked like toxic gloop, and K agreed with me). 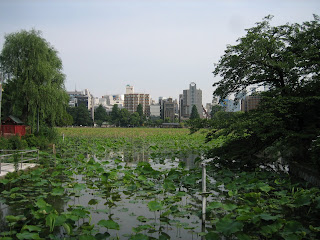 The lily pads
K even told me that for couples going to the pond, it was advisable to take the rowboats, since according to superstition, those that take the swan boats always end up breaking up. However, the few rowboats I saw on the pond didn't look very romantic. I mean, it's hard to look romantic at 3 in the afternoon, and the lady is rowing the boat with the man inside!!

But over all, the trip to Ueno was pretty nice... even though it wasn't Sakura season, which is what Ueno Park was really famous for. After all, K is a nice friend to be with, and she does know a quite a bit more about the area, since she had been staying there for quite a while. Here's a picture of the central fountain in Ueno Park: 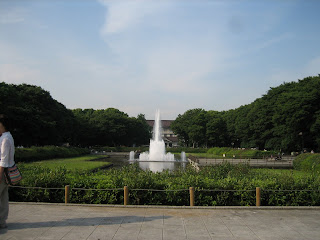 When I was there, I thought it kinda looked like MacRitchie Reservoir since there was a fountain and some boardwalks, but when uploading the picture, I couldn't help but think of Versailles. I don't know why. 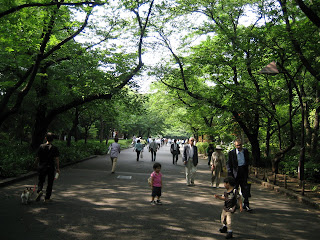 Another part of Ueno Park 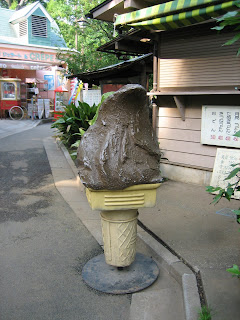 This was near a small cafe place. It really is an ice cream cone, and it's supposed to represent a chocolate-matcha ice cream, but from this angle, it looks like something else. I was sure brother would appreciate this sort of photo, and he did when I showed it to him via MSN
Then we went back to this street near the station which was a shopping sort of area that K had heard about from her friends. The prices were decent, but we both didn't get anything, since she was just doing a recon sweep, and most of the stuff there was for girls. The greatest part though, was that they were selling this: 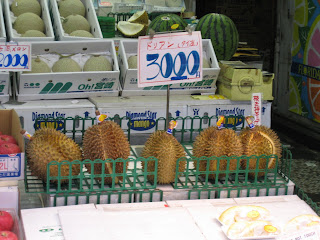 Durian! Brother would probably have flipped if he had seen this. And ¥3000 is rather steep for it, considering the prices we can get in Singapore, not to say Malaysia.
I guess it's kind of a really exotic fruit there, and I guess some people actually do eat durian in Japan. Maybe it's all the Singaporeans who go and are really homesick (K and I were obviously not homesick enough to blow that much on durian. For the record, we weren't even homesick). Or maybe some Japanese have developed a taste for durian.

So anyway, we ended the day by heading to Ikebukuro's Sunshine City, where I discovered two things:
So after that we went home. What was irritating was that there was some issue on the tracks, so I ended up waiting on the platform at Takadanobaba for like almost an hour. Then I took the first train out, only that since I was taking the train to Hajima, I should have gotten off at Kodaira to change train, but I didn't know, so I ended up at Ogawa. Good thing I kinda realized I was off course, so I changed a train, and found one that went straight to Higashi-Murayama, then took another train back. Of course, the end result was that I reached home really late. Bummer.

The next day was a sort of easy day too. I did meet up with DL and his wife J who are doing longer-short-term work here, their blog is linked over there <----. So after a short briefing, we went to Ikebukuro HC at the karaoke place, where we met the housechurch members. DL is quite an easygoing guy, really nice to work with. He's a sort of balance between Uncle L's super lasseiz-faire working style and PJ's highly structured work ethic (people who had previously been to Japan would know what I'm talking about). And I couldn't help it but he also does remind me a bit of J from church, who's like one of the resident Thai language experts. And JL is quite a friendly lady too, very chatty. Anyway, both D&J have been in Japan for about a year, learning Japanese while doing missions work, and we'll be working mainly with them.

Sunday, I went to the Tokorozawa HC at Amuzing Grace. Met some of the people that we always read about in the Missions World newsletter. After that, D&J and me went to SW's house for his international tea time, where he invites his neighbors over for tea. I think I mentioned SW before in previous posts, but I'm not sure. Anyway, he recognized me despite my change in hairstyle, and the tea time was quite fun. SW has these huge crates of Lego at his home for this sort of thing for the kids of the neighbors to play with, and he plays with the kids as well. And D&J are pretty popular with them as well. Two of the three kids there were pretty amused by the fact that DL and me had the same name, and started giggling about who was the read D.

Uncle L and Auntie C came back from Osaka that night. They were still pretty much the same, and it was nice to meet them again. Auntie C spent most of her time chasing the two kids to get their room packed up and telling me lots of housekeeping details, while Uncle L was like uploading all his pictures and showing them to me, and also telling me lots of stuff about how to use the printer, and how to use the TV set and attached pieces of equipment.

So on Monday, I said bye to everyone, since they were all leaving for Singapore, then I went off to Kotesashi to meet SW as we were going to Waseda's Tokorozawa campus for E-Crew, which is sort of like an English Speaking Corner. It was pretty nice to meet up with some of the people there, and since they want to speak English, it helps to facilitate conversation. Came home to do some stuff, but ended up snoozing till about 4, when I went to Narita (which takes very long, in case you didn't know) and met the team coming in.

So that's all the stuff that happened before 5 other team members came in on flight CX 500. Will update more of the things that happened on the first week of missions soon.

Cheerio
Posted by ArkAngel at 11:42 PM

heh. i think the macritchie reservoir-versailles thing is cos photos always make places look nicer than they actually are... when youre there you notice the peripheral stuff that sorta detracts from the photo-perfect-feel of the place (: according to my mum :D