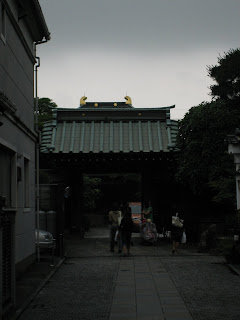 A gentle rain fell upon the streets of paving stones. Under the overcast sky, the light seemed grayish, almost as if it was dead, and a cold wind swept through the narrow alleyways under the low hanging clouds. At the same time, the air was strangely silent, despite the sound of the happenings in the street, and one could hear the soft tinkle of the bells in the shrines as clearly as the voice of the merchant promoting his wares.

Appearing from out of the misty opaqueness stepped a young man. He peered ahead through the rain and through the hair that the wind blew across his face, at the torii and beyond, into the ground of the shrine. As like with most other shrines, he felt that it was a place of peace, and yet, there was something about shrines that was vaguely unsettling to him. He turned to the one who was leading them, and cocked an eyebrow at her, as if to ask, "Here?"

She nodded in reply, and then beckoned to the other two members to move forward. She had been to the place before, and she knew her way around, yet she too felt uneasy about the place she was leading them to. It wasn't as if she could place a finger on what exactly was bothering her. It was something in the place that made her hesitant to just stroll in, and which made her pause for a moment outside as the other two caught up with her.

The other two girls looked on with some apprehension. At 19, they were both younger than the other two, and whatever had given the other two reason to pause was now starting to affect them as well. And though the interior of the shrine was as quiet as before, there was a certain heaviness that hung about the place. And for the taller girl, it was even worse, as she was Sensitive, a Cleric, so she had the ability to feel supernatural forces and shifts in power. And the corner of her eyes were beginning to tingle, a sure implication that there was something unholy residing in the area. She silently whispered a prayer for protection, to her God, that He would protect them all from the malevolence of the place.

The tall Guide snapped her helmet on securely, raised her spear, and turned to the other three. "You all ready?"

The youngest, an Archer gave her a tremulous nod, and notched an arrow to her bowstring. It was not her first time, but she did not enjoy having to go right into a stronghold of the enemy, and the tension of her closest friend in the band wasn't helping assuage her nervousness. The Cleric barely noticed, but the intense look of concentration and her continuous prayers answered the Guide's query.

The Guide turned back to the man, and motioned for him to continue. The Elemental raised his shield, and a small ball of fire popped into existence in his right hand. Satisfied that all was prepared, the Guide stepped forward, guided by the light of the fireball, and covered in the prayers of the Cleric.

High above the fluted columns and sweeping roofs, the clouds gathered, the darkness gathered, forming a mass that dwarfed the four warriors.

* * *
Ok, so my foray into fantasy writing isn't very good, but essentially, that was what we did in Kawagoe on the 12th. We went on a prayer walk through the area, and we split up into two groups at the start, and so I went with JL, and J and WT. We started with the relatively frivolous stuff first lah, so we went to this place called Candy Street, which was called Candy Street mainly because all the candy makers gathered there after a great fire 115 years ago, and the street received its name after all the candy makers had settled there.

Didn't buy much, but ate a Taiyaki, which is essentially, a fish shaped Jollibean pancake. Except mine had custard in it. Pretty good.

The next part was a bit different. We had been doing prayer walk, of course, even though we were looking at all the candy and stuff, but after clearing candy street, the tone really started to change. It started when we walked past this museum, which had several masks and miniature mikoshi. Which were somewhat disturbing. After that, we went to several shrines, and the first one we went to, WT told us later, really made her feel uncomfortable. She has the unique ability to sense supernatural forces to a certain degree, and this particular shrine, out of the three we visited, had her senses tingling.

Much later on, we found out that that particular shrine was one of the oldest in Kawagoe, and was pretty deeply entrenched. And when WT shared all this with us, it totally freaked out most of us, and we spent the night praying, which I must admit, was a really good and refreshing experience, despite the rather dark reasons for it's beginning. Coincidentally, that was at the same time the church was having JPM, and it was comforting knowing that the church was also praying for us.

So we went to another shrine and a temple, before heading back. We tried making dinner that night, and I decided to try making curry, since if anything, at least we would know how bad the stuff would taste. Fortunately, it came out ok, and no one got any stomachaches.

Friday we went to Hanakoganei, where we helped to run a kids' club with D&J and SW. The team helped with the program, and then played with some of the kids after that, which I can assure you, is more tiring that it sounds. Especially when you have to continuously run around with a kid on your back for an hour and a half. But it was fun. Only thing was that Jo couldn't join in the fun because she was still on medication, and the agreement I had with her was that she could only join in when she was fully recovered. Still, I must say she showed a great deal of maturity by not kicking up a fuss, even though she was the one who did all the planning for the kids' program. And I admired her even more when she spent the entire two and a half hours praying for the rest of us.

After that, we came back home, where we had the talk (mentioned above, same time as JPM), and slept a bit late.

Saturday we went back up to Kawagoe to do some Street E. After all the praying we did the night before, we didn't feel quite so down as like the last time we went up there. Also, we weren't quite working in the same area. I'm not terribly fond of Street E, and I still felt uncomfortable, but AA was really helpful and all, so we managed to do some stuff. Toddled over to HJ's place after that for debrief, then went back to go and prep food for the combined housechurch celebration.

Sunday we went to Ichikawa, where the OMF building was. Met some old friends, most notably S, whom I met on previous trips, and who is the person I was closest to from Japan last time. Yeah. He led worship, then we witnessed a baptism of a Chinese exchange student, and heard from a guy who sings Gospel music to do outreach.

So that was the first week. I'm like so hopelessly behind that I'll probably only finish typing out the trip way after I get back to Singapore, but oh well.

And for sister, yeah I miss the whole family. Sometimes. Haha..

Cheerio
Posted by ArkAngel at 6:27 PM